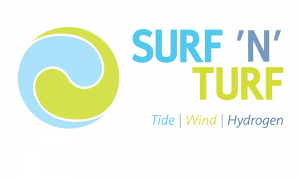 Tidal power devices located at the European Marine Energy Centre test site at the Fall of Warness, in the sea just west of the island of Eday, and the Eday Renewable Energy community-owned onshore wind turbine, route their surplus electricity to a 500kW electrolyser, which generates hydrogen by splitting water.
The hydrogen is stored as compressed gas then transported on a trailer by road and sea to Kirkwall, the capital of Orkney. There it powers a fuel cell to generate clean electricity on demand.

As well as the physical and logistical components of the project, Surf’n’Turf has been instrumental in developing the a first in an accredited hydrogen safety and handling maritime courses. An essential step in normailising hydrogen as a fuel.

The BIG HIT project was initiated in Orkney in Spring 2016. The project was designed to expand upon the concepts as developed by the Surf ‘n’ Turf project.

BIG HIT saw the installation of a 1MW hydrogen electrolyser on the Orkney Islands of Shapinsay, collocated with a 900kW curtailed community wind turbine.

Renewable electricity generated on the islands of Eday and Shapinsay is used by electrolysers to produce hydrogen, by electrolysis of water. This hydrogen is then stored as high-pressure gas in the tube trailers, which can be transported to mainland Orkney.
BIG HIT uses two state-of-the-art proton exchange membrane (PEM) electrolysers. The Shapinsay electrolyser is 1MW capacity and Eday electrolyser is 0.5MW capacity, both located close to the renewable generation assets. The hydrogen acts as an energy-storage medium which can later be converted back into heat and power for buildings and vessels in Kirkwall harbour, as well as the fuel for the operation of zero-emission hydrogen vehicles in and around Kirkwall.
These two PEM electrolysers will produce about 50 tonnes of hydrogen each year from constrained renewables. This ‘zero carbon’ hydrogen can be used to heat local buildings, and will also be transported by sea ferry to Kirkwall in 5 hydrogen tube-trailers. In Kirkwall a 75 kW hydrogen fuel cell supplies heat and power for several harbour buildings, a marina and 3 ferries (when docked) in Kirkwall. And finally, the new hydrogen refuelling station in Kirkwall fuels the 5 Symbio hydrogen fuel cell road vehicles for Orkney Islands Council.