Due to the high cost of conventional grid reinforcement, network operator Scottish and Southern Energy Power Distribution (SSEPD) teamed up with the University of Strathclyde to design another solution to Orkney’s grid capacity constraints. Work on the ‘smart grid’ idea began in 2004 and an innovative new Active Network Management (ANM) approach was developed to make better use of the existing network by controlling generator output, in real time, to match the available network capacity. 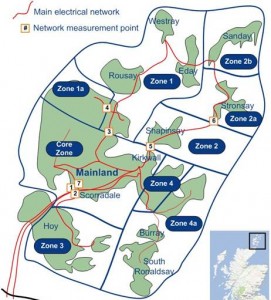 In 2009, the fully operation ANM was switched on. It allows monitoring of the power flows at several points on the network, which results in the power flows from renewable generators to be controlled. The technology is based around a central controller, which collects data from ‘pinch points’ which are distributed around the network.

The ANM system allowed the connection of an additional 20 wind power generators with a combined maximum output of 24.2 MW. The Orkney Isles now have over 72 MW of distributed generation connected in addition to a further 5 MW of microgeneration. With over 77 MW of grid connected generation, the Orkney Isles became a net exporter of electricity in 2013 with 103% of demand met by renewable generation. Of this, over 40% was managed by the ANM system, delivering over £4m of benefit to the local economy.

After its success on Orkney, this pioneering ANM system is now being replicated in other grid constrained areas, including Shetland, the Western Isles and the Isle of Wight.