OREF members have been quick to adopt electric vehicles and had seen a number of alternative fuelled vehicles here including the Shell H2 racer, SIGEN’s Fuel Cell extended G-Whiz, a home converted Renault Belingo and a Mitsubishi I-MiEV before the first permanent resident EV was taken on by OIC.

The Peugot ioN car has seen continuous service for the car-park wardens since along with a modified pick-up for litter picking duties and features on Orkney’s Sustainable Energy Strategy cover.

Shortly after this three development trusts (Hoy, Rousay,Egilsay and Wyre and Shapinsay) each took on Nissan LEAFs quickly followed by the first businesses in the form of Aquatera and EMEC each taking on ioNs and LOWS a Renault ZOE.

The uptake of EVs has been a largely private initiative and it now estimated that 90% of the EVs are in business or private ownership. This in large part has been due to OREF member Jonathan Porterfeld of Eco-Cars who moved his business to Orkney after seeing the enthusiasm and opportunity for EVs.

Since 2013 the number of EVs has continued to rise with them now being a common sight on Orkney’s roads. 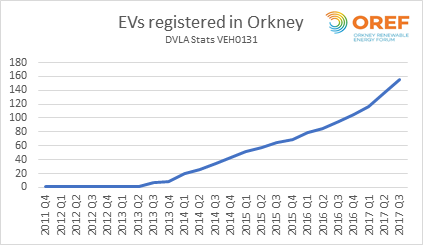