Biomass, also known as biofuel or bioenergy, is obtained from organic matter, either directly from plants or indirectly from industrial, commercial, domestic or agricultural products.  The use of biomass is generally classed as a ‘carbon-neutral’ process because the carbon dioxide released during the generation of energy is balanced by that absorbed by plants during their growth. 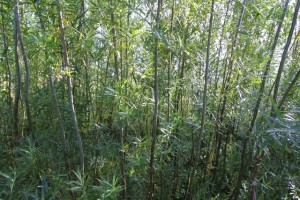 In Orkney’s case however, the lack of trees or other suitable organic matter has made the production of bio-fuel a less immediately practical solution than in some other areas, and biomass is currently limited to the installation of domestic boilers running on imported biomass pellets. There have been several trials conducted, both on Westray and Mainland Orkney, looking into the possibility of growing dedicated biomass crops in the county, however these have not yet led to any large scale biomass production in the area. The main biomass potential in Orkney may lie in the production biogas through the anaerobic digestion of slurry, however this has not been fully explored.